The 2013/14 season (with Accies featuring in the SPFL Championship) kicks off, almost for real, with a Ramsdens Cup tie at Airdrie.  There are few clues to likely team selection and formation this early in the season but after a very positive pre-season it seems unlikely that new signing Keatings will not start.  My interest will centre on the part played by player manager Neil.  Alex played 45 mins last Saturday but I will be surprised if he features on the park in this game.  Accies will start as favourites, if for no other reason that they are a division above Airdrie.  Other than that, it's anyone's guess what will happen.  The whole start to the season seems a bit surreal to me - it's still high summer in my book, with the usual raft of somewhat sad European qualifiers going on amid summer 'soccer' tournaments, golf, cricket and tennis.  Well done to Stevie May on helping St Johnstone to win in Europe and good luck to Accies tomorrow.  Oh, and I wonder what 'legends' will turn out on Sunday?   Good luck with the fundraising - more info here.
Posted by David Ogg at 23:31 4 comments:

Bring on the new season

Technically the new season started with the open game against Spennymoor Town or was it the Oban tournament?  But my season started with a trip to New Bayview to see Accies take on East Fife. This was a game that showed the benefits of a settled team as the Accies starting line up was probably as near our strongest starting eleven and East Fife; well they demonstrated a team in progress! This was my first visit to New Bayview and it is a lot like Dumbarton’s ground with a single stand accommodating all fans and a concrete wall around the other 3. However it is more than fit for purpose and the steak pies are quite good as well.

I joined just over 60 Accies fans for this game sitting in the summer sun although as the sun shines on the back of the stand it was a cool 19 degrees where I was situated. The game was all but over in less than 10 minutes as that was all it took for James Keatings to score a hat trick. A free kick, a strike within the box and a penalty made up his goals. Some how I think he just might be the surprise signing of the season. Fingers crossed. He added a fourth in the second half to finish the scoring for Accies at 4 – 0,Kevin Cuthbert keeping another clean sheet. East Fife looked a poor lot but to be fair they had 3 trialists in the team and look like a team that is struggling to know each other.

Alex substituted himself at half time and it will be interesting to see how his player manager role pans out. The only downside was Canning being substituted on 20 minutes. He left the pitch clutching the back of his right leg and obviously has an injury. Hopefully not too serious and it will clear up in time for the competitive season. On this performance we have a settled team that will cause all the other teams in the First problems. Are they league winners? Lets just wait and see.
Posted by Unknown at 21:03 No comments:


In an earlier blog I looked at how ex Accies assistant manager Stuart Taylor was getting on in his first managerial position with Limerick FC of the Irish Premier League. With the close season upon us and the Irish League playing summer football I took the opportunity last weekend to travel to Limerick to watch Stuart’s team in action against Dundalk who are managed by the ex Dunfermline manager Stuart Kenny.

Limerick is Irelands 4th biggest city with a population of just over 57,00 and in 2011 was nominated European City of Sport. Not surprising when you find they are home to Heineken Cup rugby team Munster, two other senior rugby union teams, a Gaelic football team, a hurling team and Limerick FC. Oh and don't forget the racecourse and brand new greyhound stadium. With all that competition, Limerick struggle to get a crowd and on Saturday night I found myself along with 1248 other hardy souls sitting in the 26,500 capacity Thomond Park, home of Munster Rugby and where Limerick are currently playing while a new stadium is being developed for them. What the crowd lacked in number they made up for in noise with both sides fielding drums but funnily enough no flutes. 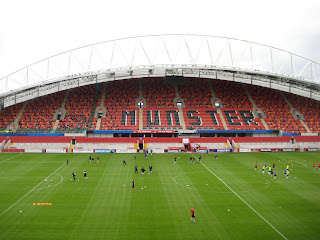 The view from the Home Stand 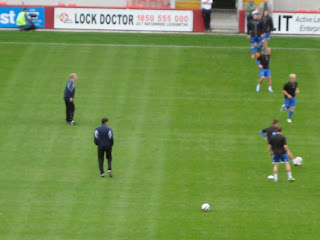 Stuart oversees the warm up

A local commentator in his pre match analysis noted that “Despite their very positive start, Stuart Taylor's brand of good football hasn't produced enough points to see Limerick bother the top teams in the Premier Division. In fact, Limerick currently sit just two points ahead of the bottom three. “ Stuart in his programme notes commented that while the team was playing well they lacked goals. And so it transpired in the first half at least. Despite creating 5 or 6 chances Limerick went in at half time 2 goals down to a Dundalk side that took its chances.  Refreshed by a gourmet burger at 5 Euros, I resumed my seat fearing the worst for Limerick and it nearly did get worse with their defender Shaun Kelly miss hitting a pass back that saw the Limerick keeper pull of a superb one handed save to turn the ball round the post for a corner. However after that the game was turned on its head with Limerick scoring first from a free kick, grabbing a headed equalizer 10 minutes later and then nicking the winner with about 5 minutes to go. The Limerick Post described the game as one of the best games of the season and a tremendous advert for League of Ireland football. I wouldn’t disagree with any of that. Even my good lady who accompanied me enjoyed the game. Afterwards Stuart told the Post that “ to come from 2- 0 down against the on form side in the league, its probably one of the most pleasing games that we have had up until now”.

The win puts Limerick into the top six of the league and well placed to progress further or at least consolidate their position in their first season back in the top league after 19 years. Off the park progress is also being made in developing the club’s youth academy with a link up with the local Technology College giving access to the College’s sports facilities including artificial pitch. If this keeps up I rather suspect we may see Stuart back over the Irish Sea sooner rather than later. In the interim if you get the opportunity Limerick city and football club are well worth a visit.

To follow Stuart’s progress here is the link to Limericks’ official site http://www.limerickfc.ie/

1. Who we are. This blog is written by Accies fans, for Accies fans. Anyone is free to read and to contribute, including fans of other teams, as long as they abide by these rules.
2. What we stand for. We support Accies, the team and the club, and this blog is a vehicle to express that support, and further the interests of the club, and the first team in particular. Criticism is welcome, as long as it is constructive; abuse is not.
3. Support for youth development. We support the football development of young people and children at all levels at Accies, and welcome contributions on how these efforts may be advanced.
4. Support for Accies women. We support the efforts of HAWFC, Hamilton Accies Women's and Girls' Football Club, and encourage the involvement of women and girls in football.
5. Support for supporters. We support the efforts of The Hamilton Academical Supporters' Society (the Accies Trust), and all groups who help and represent supporters.
6. Family-friendly. All of the content of this blog is intended to be suitable for a family audience, including children, and we ask everyone to bear this in mind when commenting. If this blog was a movie it would have a U certificate.
7. Open and honest. All of the contributors to, and administrators of this blog are genuine Accies fans, identified by their real names, and we ask everyone who comments to use their real names too. There is no editorial policy, beyond these rules, and all opinions expressed are the open and honest opinions of the named contributors.
8. No offensive language. Swearing, abuse, and any language of hatred will not be tolerated. No comments of this kind will be published.
9. Respect for other users. We ask that all comments show respect to all contributors, acknowledging that they contribute in good faith. Disagreement is fine; abuse is not.
10. Feedback. We welcome feedback of all kinds. If you wish to write blog contributions, have any ideas for further content, or any other comments, including complaints, please contact one of the administrators.